In Green Bay with the President - Part 2

Well, that was quite something.

There is a much more mellow vibe at these official events than at campaign things, where everyone is scrambling to take advantage of every minute of free advertising, trying to rush through this event to get to the next one, wondering whether they should have come here in the first place, etc. Here, the mobile Obama White House -- a smooth, disciplined organization if there ever was one -- swept into Green Bay and made the most of a friendly small town crowd. 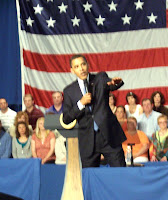 And, in person, President Obama rocks much more than he does on television. He has been described by even supportive Washington insiders as a bit of a "cold fish" personally and I think that coolness comes across on TV as aloof, sometimes. Although he is ten times more of a dynamic media personality than anyone else in politics, that may be just because there literally is no other competition. But, in person, especially when the teleprompter is brought down and he interacts with people, he is articulate, interesting, sincere and -- funny. There was a time late in the event when he started riffing on how he does not want to run everything and had other things to deal with other than health care:
That's why I'm always puzzled when people -- they go out there creating this bogeyman about how, you know, "Obama wants government-run" -- I don't want government to run stuff. Like I said, I've got enough stuff to do. (Laughter.) I've got North Korea, and I've got Iran. And I've got Afghanistan and Iraq. (Applause.) I don't know where people get this idea that I want to run stuff, or I want government to run stuff.
At this point, I thought the president hit the comic rhythms of Richard Pryor. He was feeling it and seemed to be enjoying the day with the upbeat northeastern Wisconsin crowd, while making important points about the most important economic issue -- health care -- in the country.
I had several extremely good vantage points as I moved from the front of the camera riser facing the front of the stage (Obama's lectern was right at center court -- he was working somewhat in the round in a small high school gym) and the right side of the stage. When he faced my way, which was often, I felt somewhat connected -- so much so, I felt somewhat stupid trying to get away with doing some texting while the President of the United States seemed to be talking directly to me. Having been to many of these politician events, it was a strange feeling and I wonder if others felt the same connection.
Watching him work this friendly room, I would like to see what he would do with a roomful of the kind of people who keep saying or thinking he is socialist, anti-American, etc. How about a roomful of wing-nuts? Get him in a room with Limbaugh and Hannity or local pipsqueeks like Sykes or Belling. Obama would eat them alive. That's one of the many reasons they cower in their safe studios, take only scripted or friendly "callers" and maintain only a distant connection to what is going on in the real world. Obama in a room full of right-wingers could not charm them because they are not charmable. But he would clean their clock with facts, argument and humor. As a spectator sport, I'd buy pay-per-view for that one.
As for the substance of his remarks, they were always knowledgeable and often insightful but also overly careful as he again tries to reach consensus on an issue on which the Party of No, again, is not engaging and, again, will give him zero support. I completely agree with him doing this dance. Although he'll never get any support from the suicidal GOP, this PR effort is more about convincing Middle America that he has a reasonable way out of the nightmare of American health care, which all of them are either dealing with directly or sweating what is going to happen the next time they get sick or injured.
The bright affection shown by the overflow crowd was not all because of the president's rock-star qualities, although he certainly has those. It was also because he came to them with a commitment to get something done on an issue important to all of them. The Republicans will ignore the problem and try to obstruct Obama's serverely compromised solutions at their peril.
Posted by Mike Plaisted at 1:20 PM

You sure have the talking points down, "the Party of NO", have you even read Paul Ryan's health care plan?

Have you read the Kennedy-Dodd health care plan? I admit it is supposedly a draft of a draft, but it is an indication of where the Dems want to go it is scary. It will lead to total take over health care. The Lewin group estimates that over 131 million people will be switched to the government plan, which will lead to the demise of the private plans. Then Government will be able to dictate mandates to doctors and health care providers. According to the draft, Doctors will be paid Medicare rates +10%? Medicare care rates are so low now that many doctors, especially those in primary care are not accepting any additional medicare patients. Doctors have to go to Washington every year to address proposed medicare cuts imposed my the SGR formula, under this proposal, doctors, hospitals, nurses and other health care providers will be totally dependent on Government for their rates. Did you know that 60% of physicians surveyed indicated that they are thinking of leaving medicine and are not happy? Right now we we have a Primary Care doctor and nurse shortage and many Primary Care doctors are nearing retirement age. With the baby boomers retiring and putting more stress on the health care system, we are going to have a disaster. How is Obama addressing that? Does he care?

Mr. Obama seems like a nice guy, but he is an empty suit. He promised the most transparent admin (a lie), he promised no lobbyists, (a lie), he promised the most ethical admin as did Pelosi with congress (lies). How many tax cheats are in the Obama admin, I lost count. He has back peddled on many campaign promises already; taxing health care benefits is on the table now? Totally different from when he said before. I know you are in love with him, but the fact remains is that he gives great speechs, but I have come to the painful awareness that he is over his head.

I am an independent voter, and do not vote based on party. I voted for Obama, which I am ashamed to admit. He is not the centrist I thought he was. He is not the guy I thought he was. Mike, I hope your young love lasts, because mine sure didnt, but I try to see both sides, unlike people like you and Rush, Hannity, Olberman, etc. always makeing excuses for your party and blaming others.