In the race to see who can be more ridiculous taking advantage of the radical Republican stranglehold on Wisconsin government, it’s hard to top the sponsors of the concealed-carry bill currently on its way to the Senate floor.

Even the primary lobbyists for the manufacturers who would supply the killers and potential killers on the fringe of the gun-totting world, the NRA, have always supported some kind of background check and/or training and/or permitting before setting the twisted victims of Small-Man Syndrome loose in the general public with loaded guns in their pants.

But not those Wisconsin Republicans, no-siree.  They aren’t going to be talking into half a bad idea when they can have the whole thing.  Permits are for pussies – do I get to carry my piece, or what?  I don’t need no stinking permit.  Churches, day care centers, domestic abuse shelters, the Capitol – no place of peace or protection is too good for a little hot lead at the ready, just in case.

Naturally, the NRA has now has reversed itself on permitting and supports the anything-goes, Wild-West version that has made it through committee.  All the better to get more guns sold to more people faster, the safety of the general public and innocent bystanders be damned.  The out-of-state interests in the death industry driving the NRA even poll-tested a friendly label for the notion that nobody needs to review exactly who is walking around with itchy trigger fingers – “constitutional carry”.

According to the Cap Times, “A relatively new trend as far as gun-related legislation goes [read: a new way to sell a bad idea], constitutional carry is based on the premise that it is a citizen's constitutional right to carry a weapon. No training, permits or license are required to do so”. This is like saying there is such a thing as “constitutional speech” that you can use to cry “fire” in a crowded theater or maliciously libel someone for personal gain.

It is amazing how quickly the phrase “constitutional carry” has crept into the discussion in the Journal Sentinel and other publications, without quotation marks and without peels of laughter at such a ludicrous notion.  Leaving aside for a moment the issue of whether the Second Amendment creates an individual right to own firearms (I disagree with the conservative wing of the US Supreme Court that ruled it did), any constitutional right can be controlled or restricted for a legitimate purpose.  It is not surprising that the thumb-sucking “I can do what I want” demand of the loud bullies promoting the bill has had such an effect on the Republican legislators who are spurred to action by supposed “purists”, lest they be labeled RINOs or, worse, reasonable.

After reading internal polls showing independents running away from the GOP in droves at the very notion of the completely unregulated arming of a particularly angry part of the public – much less young men in their 20s, who in Milwaukee County currently get 60 days to six months in jail, just for having a gun in their car – many of the well-paid Republican operatives polluting the airwaves, newspapers and blogs in Milwaukee are advising their fellow travelers in the legislature to come to their senses – on this issue, anyway.

Radio clowns Charlie Sykes and Mark Belling are encouraging Republicans not to commit political suicide by permitting would-be civilian Dirty Harrys not to be permitted.  Rick Esenberg has taken a break from offering his bad advice to the Walker legal team fighting to bust unions in the state to issue his personal tut-tut (“a sound principle too far”, he says about the unsound taken to its logical conclusion). The bill is even more the Journal Sentinel’s in-house wing-nut. Patrick McIlheran, can stand.  The nut-bag state senator pushing the bill, Sen. Pam Galloway (R-Wausau),  is “right in principle and wrong in practice”, he says, admitting to the lack of adherence to principles he regularly berates in others.

But the self-appointed monitors of radical Republican ideology can’t get off the hook that easy.  If Galloway is “right on principle”, as Esenberg and McIlheran say, then what is their problem with her following through on that principle?  Their encouragement for her to be unprincipled is simply borne of political expediency – they “know” she’s “right”, but following her there is just too much for the preservation of Republican power.  They are stuck with the people they have promoted to power and the logical results of their own sanctimony. 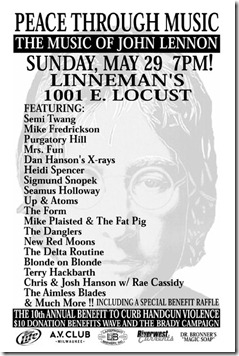 With the radical Republicans in Madison going gun-crazy, the 10th annual Peace Through Music benefit for the Wisconsin Anti-Violence Effort (WAVE) and the Brady Campaign to Prevent Handgun Violence couldn’t come at a better time.  Join us at Linneman’s this Sunday night, May 29th, for a night of great local music, starting at 7 p.m. and going all night.  I will be hosting all night and playing with Fat Pig at 9.  In the words of my great friend Marcus Smith: Don’t meet me there – BEAT me there!

Posted by Mike Plaisted at 2:16 PM

While there may still be some weight to the phrase, "All politics are local" I believe that it is more accurate to say "All politics are racial". There can be no other reason for requiring (1) showing documentation in order to vote, (2) allowing all the "law abiding", aka white residents, to go around armed to protect themselves from all of the law breakers, aka people of color.

Longing for the good old days of a "well regulated militia."