You know, it's not like I haven't tried to get this thing going again.  For instance, here is a piece of an abandoned post back in September:

"You say I got no feelings
This is a good way to deal with it."
-- "Lipstick Vogue", Elvis Costello

I had this big plan to get back in the saddle and ride this thing [the blog, that is] in the run-up to the November elections.  I was going to the Elvis Costello show at the lakefront last Saturday [Sept 15th] anyway and thought I would work out some of the writing kinks from this blog's summer-long dormancy (but what a summer it was...) by doing a review of one of my all-time favorite artists in Milwaukee in a brand-new venue on a spectacular late-summer night. 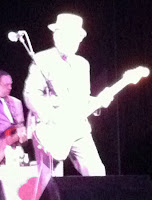 But then, the unexpected happened. Elvis Costello and the Imposters came out and laid an egg.  He mailed it in.  Rushed and indifferent, it was as if he couldn't get off the stage and out of town fast enough.  Indeed, an off night with Costello -- like Springsteen, with his non-E Street Band on Election Night 1992, but not as bad -- is better than anyone else at their best, but, still. This is the guy, after all, who played Milwaukee with only keyboardist extraordinaire Steve Nieve 10 or so years ago and came out for four encores, including a brilliant acepella off-the-mic version of "Couldn't Call It Unexpected No. 4" that is still reverberating off the walls of the Riverside. That was an engaged, dynamic evening of some of the best songs ever written.

This one had some of the same songs, but none of the magic. It's as if he looked out at the half-empty seats of the instant white-elephant BMO Harris Pavilion (hard to tell what non-Summerfest acts they thought they could fill that with on a regular basis) and decided to, I don't know, do those things that rock stars do when they've landed in the wrong place at the wrong time.  It seemed like the bus was already warmed up and ready to go as the show started, running through 4 of his best known songs in the first 10 minutes...

By the time I wrote this, I was leading up to the fact that President Obama filled the venue exactly one week later. So I guess there might be some use for that place after all...

See? Aren't you sorry you missed all this great writing?

I do somewhat regret not putting my (literally) two cents in this year on important post-recall issues like, for instance, the Republican presidential primaries.   Sometimes I think that particular conglomeration of losers existed only for my personal entertainment; whether it was Michelle Bachmann peculiar form of alien channeling, Rick Santorum's whiny hysterics, Newt Gingrich's snootily, elitist, why-are-you-so-stupid assuredness, etc.  It was an occasionally amusing clown show, unless you considered how close one of them was to being the nominee of a major party.

Alas, we are not there, but here: 3 days before Election Day, with a rich, pampered elitist in magic underpants, Mitt Romney, trying to fool the American people into electing him.  And, just yesterday, I found myself in Beloit, helping the Obama campaign manage the press section gathered to hear Vice President Joe Biden at a middle school there.  An overflow crowd was treated to a great speech by Biden, who is one of the president's best assets.

Obama is blessed (if there is such a thing) with the valuable support of at least three extraordinarily talented veterans of a political generation almost -- but not quite -- past.  Each finding their niche, all have provided invaluable support for his steady governance, and, yes, his campaign.  His biggest star and the best hire by far is Hillary Clinton as the Secretary of State.  She has expertly helped him transition our nation away from the belligerence of the internationally-destructive Junior Bush era towards a more positive, productive foreign policy.  She has dealt with crisis with a steady hand, kicked ass where she had to, and put us on an even keel with a forgiving world.

Another veteran of the same kind of slash-and-burn politics that have been used against him every day of his presidency is, of course, Bill Clinton. The former president, already settling into his role as the best ex-president ever (his humanitarian efforts in Haiti and the Clinton Global Initiative, to name just a couple, while the still-embarrassing Junior Bush gives closed seminars to the rich about how to send their money offshore to the Cayman Islands), has become Obama's best campaign surrogate. His incredibly effective Democratic convention speech wasn't a surprise to anyone who saw him here in Milwaukee in the closing days of the ill-fated Walker recall election (see that picture over there).  Speaking without notes that day, Clinton did an incredible riff on the need for politicians to work together to solve problems, rather than the kind of drop-the-bomb strong-arm tactics of the Walker Republicans.  At the convention and since, Clinton has been the most effective spokesperson for the saner political world that will never occur with the current GOP.  But, if they ever come to their senses, we'll be there.

But Joe Biden may, in the long run, be more integral to the success of the Obama presidency than anyone else. He has been in the room during every significant decision, from health care to Osama, adding heft and a wealth of Washington experience to the mix.  In his debate with Wisconsin's favorite twerp Paul Ryan, he proved himself to be a strong and no-bullshit advocate for America in general and the Obama administration in particular. Unsafe, out of the talk-radio/Fox News cocoon, the clueless Ryan looked like he wanted to crawl back into the dark hole from whence he came.  And Biden put him there.

In Beloit, Biden gave the best political speech I've ever seen in person -- as effective as Clinton, but not as subtle.  Focusing on Milwaukee Mayor and recall hero Tom Barrett standing in the front row (who yelled at me for letting the blog go dormant; ergo, my fairly urgent effort to get something out today), Biden frequently started his points with "Tom, you know when governments work together..." and the like.  There were lots of jokes and anecdotes about his mother saying "Joey" this and "Joey" that (OK, maybe that was a bit much).  At his best, he took apart the Romney/Ryan lies about Jeeps in China and other ridiculous fantasies of the Far Right with humor, effectiveness and truth.

Dare I say -- it looks good as I hit the "publish" button on Saturday night. States like Ohio and Wisconsin are going to come through and send Romney back to his career, making millions raping and pillaging the vulnerable businesses he pretends to care about.  Hopefully, Obama and Biden will bring along a continued Democratic Senate and, if we are very lucky and if lightening strikes and we win the lottery, throw the House Republicans out on their sorry ears.  As Bill Maher said on his show last night, "If it's Obama, America wins. If it's Romney, comedy wins."  As much as I like to laugh, I'll take a victory for America any time.
Posted by Mike Plaisted at 8:45 PM