One of the (many) reasons I stopped blogging for a couple of years is because I found it impossible to keep up with the 24-hour -- now, really, 8- or 4-hour -- news cycle.  By the time I had gotten the time to write something, the urgency of the issue, whatever it was, was gone and we were on to the next thing.  Talking about the too-polite Republican debate from way last Thursday ("Please, Sen. Cruz, after you"..."No, no, Donald, please, you first...") became badly dated within 24 hours, when protesters descended on a Trump rally in Chicago and the Big Tough Trump wimped out and cancelled. "Security concerns" my ass.  He couldn't face the uncontrolled heat of the rejection of his politics of fear and racism.

Here in Wisconsin, Justice Rebecca Bradley's bigoted, stupid writing while she was an undergrad at Marquette was too soon overshadowed by the story of her representation of a boyfriend in a custody battle with his ex-wife.  The no-doubt gratis representation was declared not an ethical violation by the presiding judge when the ex and the GAL complained about it.  And maybe it wasn't, technically. Lawyers can represent people they've fooled around with, if the fooling around was before the representation.  I'll remember to put this in the old memory bank for future reference.

But imagine you are the GAL interviewing the 16 year-old child and the kid starts talking about Daddy's girlfriend, "Aunt Becca", or whatever, who apparently was so involved with the kid that they exchanged gifts at Christmas.  Now, should the GAL be talking to the husband's counsel, not as his lawyer, but as a member of the extended family?  How that's not a conflict, I don't know.  Bradley certainly seems pretty sensitive about it -- check out the link to the audio of the Journal Sentinel reporter asking her about it for the first time (on the left side of the page linked above).  While her ever-present handler is trying to get her out of there, she blurts out "The Milwaukee Journal Sentinel should be ashamed of itself and you can put that on the record." Well.  Excuuuuse me.

That was only Thursday after the student-writing story on Monday.  By Friday morning, the newspaper was printing GOP spin to soften the blow; about Judge Kloppenberg saying Lincoln had slaves, that Justice Anne Walsh Bradley also skipped out early on an oral argument while she was running, and blah blah blah.  In the meantime, the Shame of the Journal Sentinel, in-house Republican shill Christian Schneider has joined the usual gang of local and statewide coordinated right-wing radio talkers to take the desperate Bradley campaign's talking points out for a stroll in a full-court press of denial, obfuscation and outright lies.

A weekend of volleyball watching (go Ken and Aaron!), a concert at the Coffeehouse (killed it) and a day of trial prep (didn't go) later and your humble reporter is now, a week later, still trying to get my thoughts out here about Rebecca Bradley and her absurd student "writing".  Having done a lot of it when I was an undergrad -- lots more for much longer than she did, I think -- I know something about what and why you write at a young age, and what it means for your middle age and beyond.

I wrote for the Daily Cardinal at UW-Madison from the summer of 1979 until my graduation in 1982; then a little more on the opinion pages while I was in law school, mostly around the 1984 election cycle.  Besides having a great time with some great people (we still get together and laugh with and at each other about once a year), I started on the Fine Arts pages (back then, the writer ghetto for the strongly progressive paper) and, eventually, with opinion columns (mostly media criticism), some news stories (Moonie recruiters were my beat for a month) and the staff actually gave me the keys to the place in the summer of 1981, when Jim Nelson and I put out a twice-weekly edition for a couple of months with a skeleton staff and an excellent distribution manager (Hi Mary!). 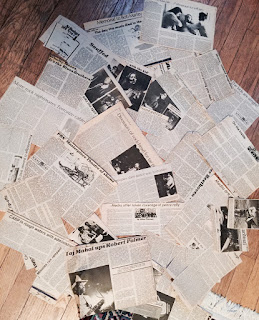 I was not J-School like most of the more serious people there, but I was enthusiastic about getting stuff in the paper.  I was pretty much allowed to write anything I wanted, and the editors often didn't know quite what to make of my writing, so they just ran it without many edits. The first piece I got published was a review of Fleetwood Mac's Tusk. Complaining about that over-hyped, inflated mess of a double album, I tried to be funny about it, setting back my career as a humorist several decades. "How many Fleetwood Macs does it take to screw in a lightbulb?" I asked. "Only one, but it will take him or her two years and it'll cost ya a million bucks!" This caused one of the news editors (now still active in Milwaukee County politics) to stand up at the next staff meeting railing about running this shit in the paper and, by the way, who the hell wrote it?  I sheepishly raised my hand, and my career at the Cardinal began.

I understand that this was back in the early '80s and young Ms. Bradley's deliberately ignorant diatribes were a decade later, but, still, this was a different world.  In both eras, there was no social media -- if you were a college student with something to say, student newspapers were the only game in town. And, if you actually got something published -- something you meant to say, something you cared about enough to spend the two-to-three hours it took to write it and fight the editors, if you had to -- it was an accomplishment.  You were proud of it.  I saved clips of every one of the things I had published in the Cardinal (see above for just a small part), right down to the three-inch TV Screams columns.  You can bet, when Rebecca Bradley got the Marquette Tribune to run her hateful screeds, she was proud too.  She ran right back to her cabal of College Republicans and celebrated, I don't know, however those people celebrate.

I also knew, as did all college writers, that whatever you wrote would go down on your permanent record. Bradley didn't write just to write -- she wrote to advance her stature in the then-burgeoning right-wing college "movement".  We knew these types of people well at the Daily Cardinal.  In the early '70s, right-wing icon William F. Buckley bankrolled the Badger Herald as an "alternative" to the Cardinal's unabashedly leftist perspective.  Thus did a bunch of conservative mouthpieces find their way onto the campus' news kiosks, blathering all kinds of predictable nonsense from their dark-money handlers.

To a (usually) man, those people rewrote conservative talking points with enthusiasm and vigor, and some probably moved on to careers as another kind of Republican hack, proud of what they wrote and embracing what they advocated, building on it to an always-well-paying right-wing career of lies and spin. This was fine for most seeking the comfort of the right-wing bosom from which the Herald sprung in the first place.  But, when one of their own tries to get elected to something actually important, like the Wisconsin Supreme Court, well, all of a sudden, the literature of hate is treated like a symptom of a childhood disease. Oh that thing about gay people deliberately killing themselves with AIDS, yeah, I was so young and drunk...

Except that she wasn't that young and not drunk at all.  She meant what she said and she said it.  I've read a bunch of my old stuff in the past week and I don't have to apologize for any of it.  I'd write all of it again -- perhaps with a lot less use of the phrase "of course" -- I used that a lot.  What I wrote was part of what I was and still part of what I am.  I think college writers are all proud of what they wrote and they still have the same world view -- they just go after their goals in different ways. I know I do.

Bradley certainly has.  She has never swerved off the nut-right political path, serving as president of the radical-right bunch of lawyers called the Federalist Society and all manner of other right-wing groups and causes.  As late as 2006, Bradley was writing about how pharmacists shouldn't be "forced" to be "a party to murder" by doing their job and filling birth control prescriptions. It is written in the same kind of deliriously clueless writing from her Marquette days, without the name-calling.  The student apple didn't fall far from the adult tree.

"Have I offended anyone? Good..." she wrote in a particularly charming reaction to the election of Bill Clinton in 1992.  That's what she meant to do then.  As a member of the radical right-wing on the sadly decimated Wisconsin Supreme Court, she doesn't care what you think now, either.  Except for this election thing.  At least until April 5th, she has to pretend that she isn't who she was in college and who she is now.

But I firmly believe that college writing is a window to the soul.  And looking at Rebecca Bradley's bigoted, hateful writing, the view is not pretty.